Decred is gearing up for growth – a quick roundup of recent developments!

It’s been a busy week for Decred, and things aren’t showing any signs of slowing down! This week we have seen the launch of a snazzy new update to the Decred Forum, the release of Decred v1.0.7, the 10,000 follower mark has been reached on Twitter, and with the launch of the Decred website in 13 different languages yesterday, it looks like this number is only going to get bigger! 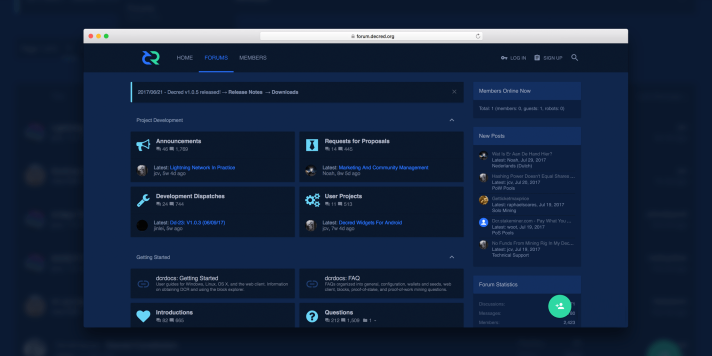 Forum update
The Decred forum has had a complete overhaul, with the implementation of a new design that brings it in line with the new Decred theme and branding. Along with Reddit and Slack, the Decred Forum continues to provide the community with an invaluable source of information and means of keeping in touch with other Stakey fans around the globe. If you’re not already a member, sign up and check it out at forum.decred.org.

Website Translation
As part of Decred’s grand plan for global domination the Decred website has been translated into 13 different languages, including: Chinese, Arabic, Portuguese, Russian, Dutch, Italian, German, French, Finnish, Spanish, Greek and Polish! I believe the website translation will be fundamental in building new Decred communities around the world, along with educating the billions of people who don’t speak English about the benefits of Decred.

However, we aren’t stopping here! More languages are set to be added to the list soon, including Japanese, Korean and many others too; inclusivity is one of the core principles of the Decred Constitution. In line with this, and to extend our reach across all corners of the globe, we have plans launch in as many languages as possible to ensure we cater for everyone’s needs – no matter where you’re from, or what language you speak!

In addition to the recently released website translation there are also plans to release translations of all Decred documentation. If your language is not currently supported, and you’re capable and willing to help out, then why not drop by the #international_ops channel on Slack to find out how you can get involved!

10,000 Twitter followers
This week has also seen @decredproject reach the golden number of 10k Twitter followers! In just a few months Decred has almost doubled its number of followers on Twitter. In recent months there’s been a big focus on improving both the quantity and quality of tweets in an effort to help keep the community up-to-date with the latest Decred news and announcements – something that’s only going to get even better!

However, Twitter is not the only social media platform that has seen success recently. In the last couple of months Reddit members have almost doubled, and subscribers to the Decred Assembly YouTube channel have almost quadrupled! All down to the hard work of the Decred contractors working in these areas. A big thank you from all the community for your efforts!

As part of its global growth plan Decred hopes to follow in the footsteps of this success with plans to launch across other popular social media platforms in an effort to extend our reach into new communities around the world. In turn, this should also bring about an increase in the number of services providers that accommodate for Decred in the more underserved parts of the globe. The current Decred Brazil community and Facebook group is a prime example of the strong Decred community we hope to build, the Decred Brazil ecosystem continues to expand rapidly because of it.

Stay tuned for more details – but if you’re interested in helping build up a new community in your part of the world then get involved!

Release Update
The new v1.0.7 release brings some awesome new features to Paymetheus and Decrediton. Along with a whole host of backend improvements, users will now benefit from new artwork, animations and an enhanced user interface that makes ticket buying even more enjoyable!

The release has also resolved a few minor issues in dcrwallet, and laid the groundwork for some highly anticipated and regularly requested staking features!

In addition, the release also brings us one step closer to the long awaited Lightning Network integration on Decred. There have been a whole host of new improvements to the infrastructure of btcd that lays the foundations to provide full support for the Lightning Network!

On behalf of all the Decred community I would like to thank the Decred developers for their tireless work behind the scenes, and also welcome the new additions to the party! To update your wallet and check out the new features for yourself visit decred.org, and for the full release notes visit Github.

In all the time that I have been a part of the Decred community I’ve never been so excited about the future! Although we’ve seen lots of great improvements recently, things are not slowing down – in fact, the pace is picking up! Building on the solid foundations the marketing team have built over the last few months, and in response to feedback from the community, there has recently been an overhaul in Decred’s approach to marketing (keep your eyes peeled for an official post on this). And, as outlined in the recently updated roadmap, there are a whole host of major features due over the next few months.

We will soon see the release of the proposal system: the second step in the process of converting Decred into a fully functioning stakeholder-directed DAO. The proposal system will be the first of its kind that is actually anchored to the blockchain itself. It will be a censorship resistant system that will allow stakeholders to submit proposals for funding towards a project that adds value to Decred.

At the present time governance is also high on everyone’s agenda. We’ve all recently witnessed what happens to a blockchain without an effective governance system. The creation of Bitcoin Cash on the 1st August has highlighted the need for decentralized governance to everyone. While a lot of Bitcoin holders have enjoyed receiving their free Bitcoin Cash airdrop, I suspect that the real governance issue will only be recognized over the coming weeks when the incentive of more profitable mining – combined with an increase in value – may cause some Bitcoin miners to switch blockchains. In turn this could lead to Bitcoin Cash gaining more traction. Furthermore, if the Bitcoin block size increase goes ahead as planned in November with the SegWit2x proposal it is likely that the threat of a Bitcoin blockchain split will emerge, unless a high percentage of miners come to an agreement. It will surely be an interesting time! A time that Decred is uniquely positioned for as the only cryptocurrency with a working on-chain decentralized governance system that solves these issues.

Following this, we will see work begin on privacy enhancement. The feature is a closely guarded secret, and no one other than the developers themselves knows what this will entail, but you will have to take my word for it when I say I have never seen or heard of anyone that is as serious about privacy as the current Decred developers. The extent that they go to ensure they maintain complete privacy is truly mind-boggling! So I can confidently say that I’m excited!

Furthermore, since the recent call for new Decred Astronauts in last month’s blog, lots of new contractors have been brought on board and this will also going to help speed up the development process to ensure that everything is delivered as planned. New contractors have already made some fantastic contributions to the project, and I am sure this is something that will continue!

Overall, the Decred ecosystem is expanding rapidly! With the recent releases, the future roadmap, and a whole host of surprises along the way, the future is bright for Decred. If you’re not part of it already, now is the time to get involved – join the Decred community!